supermoon – what is it?

Posted by imus on May 5, 2012
Posted in: History-Science-Interesting, World News. Tagged: astronomy, moon. 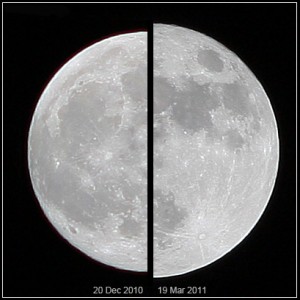 The scientific term for the Super Moon is “perigee moon.” The perigee moon occurs when the moon’s elliptical orbit is closest to the earth. During the night of May 5-6, the full moon reached perigee and it should have appeared 14% bigger and 30% brighter (than a full moon at apogee, farthest away).

The supermoon of March 19, 2011 (right), compared to an average moon of December 20, 2010 (left). Will you be able to notice with your eye alone that tonight’s full moon is bigger or brighter than usual? Astronomers say no, but it’ll be fun to stand outside under tonight’s full moon and know the moon is closer than it has been since March 19, 2011. Image Credit: Marco Langbroek, the Netherlands, via Wikimedia Commons.

Even the proximity of full moon with perigee in today’s moon isn’t all that rare. The extra-close moon in all of these years – 2011, 2012, 2013, 2014 and 2015 – finds the full moon taking place within an hour or so of lunar perigee. More often than not, the closest perigee of the year comes on the day that the full moon and perigee coincide.

How often does the full moon coincide with perigee? Closest full moons recur in cycles of 14 lunar (synodic) months, because 14 lunar months almost exactly equal 15 returns to perigee. A lunar month refers to the time period between successive full moons, a mean period of 29.53059 days. An anomalistic month refers to successive returns to perigee, a period of 27.55455 days. Hence:

This time period is equal to about 1 year, 1 month, and 18 days. The full moon and perigee will realign again on June 23, 2013, because the 14th full moon after today’s full moon will fall on that date.

via Biggest and Closest Full Moon