A rabbit skeleton I found in the summer of 2013, it must have been sitting in the rain and hot sun for some time, all the tissue was mostly gone but much of the fur was still there. It was gross but I just went back to the car, got a ziplock bag and some gloves and shoved it in. Then I laid it out in the back yard under some bricks to let nature take its course. Picked the bones out later and then bleached them, the last set of bones I actually used bleach with, now I know that peroxide is much better. This turtle skull came from a partially complete skeleton and shell I found in the Big Creek greenway. Found it quite a few years ago, need to look up the first photos I took of it, along with the shell. This is the skull from a blue heron I believe, found it just off the trail @ the Big Creek Greenway by where I work, I think it’s nest along with one of it’s young was knocked down during a storm, it was in the wreckage of the tree. I also found a partial shell from an egg so I actually think the baby chick hadn’t even hatched yet, very sad…

BTW, I have NEVER killed any of these animals, I have found them after they have met their demise. I found this deer buck skull quite a ways away from the rest of the skeleton, although I never picked up any of the rest of the bones. The skeleton was across from a flood area just next to where I park my car @ work. It was on the far bank of a creek that joins the Big Creek after a bit. I could see the bones and decided to investigate the area on the other side of the creek and stumbled across the skull. Moved it to a place closer to my car but hidden in the bush so I could pick it up @ the end of the day, didn’t want to put the thing in my truck (it was HOT and would have to stay there until I left). This I think is a possum skull, found it and left it deep in the woods behind the shopping centers on the other side of the Northpoint Mall just inside the Big Creek Greenway area. I finally went back and tried to find it one morning during my walk, equipped with a zip lock and some gloves. It was quite dried out and no real flesh but it did have some leathery skin/hide. 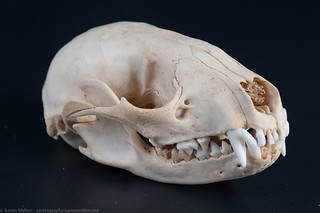 My latest find was a raccoon that I found off the side of an overpass by the Mall of Georgia. The skeleton was among some rocks below and off to the side of the Ivy Creek Trail. Actually between the exit ramp to I85 and the side of SR20, just between the trail and the creek. I ran back to my car and picked up the BIG ziplock bag a carry around just for this sort of thing. I went back a few times after that to find more bones and bits that had been washed down into and between the rocks on the side of the creek. Also got funny looks from some of the walkers on the trail as I did so.