Pack 9 (33-36)(September)(8.13), Received on 8.10 before either Packs 7 or 8. Didn’t get to working on this before 9.20, I then opened all the packs and assembled the bottom framework adding most of the ramp frame and the last of the piece of pie. These issues also contained the three sections of the rear engine cowlings that I will not be gluing on until I get the outside of the ship painted. These issues also contained several lower hull sections for the landing gear and front loading dock.

8.11 Ordered up 3 ParaGrafix Photoetch kits for the Millennium Falcon by deAgostini, the Hold kit, the Corridors kit and the Gun Ports kit. For a total of over $150. yes I’m mad, as in crazy.

Pack 8 (29-32)(August)(7.16), Received on 8.30 the Pack. 9.11 opened up these and assembled the framework, finished the bottom hull support assembly as well. Actually got this completed as far as the hull frame on 9.20, screwed them all in and found out the next pack, #10 has shipped. This completed the next two pieces of pie of coming back around from the rear of the ship to the ramp area.

Pack 6 (21-24)(June) Received 5.21 Didn’t touch anything for the last month almost. Messed with the 16th Stage of the Falcon. Not much to do there since I haven’t figured out what I want to do with the floors of the corridors, I think I’ll be purchasing the photoetch stuff, it’s cheaper although I’m not sure it’s better. I’d like to buy the lighting kit for the exterior before too long as well. It’s almost the end of the month and I haven’t gotten a send notice for the next Month, #7, I’ve gotten charged for it about the 13th of June. Just looked on the Forum and Pack 7 has been backordered since at least June 8th when a guy complained about not receiving it. The only work was “backordered” will notify when shipped.
8.30 I opened up all the issues from the Pack, the assembled the lower hull framework and got the hull plating on (only superficially). Did nothing with the halls and such. Need to get painting and re-working the hall decks for lighting and the Paragrafix add-ons. 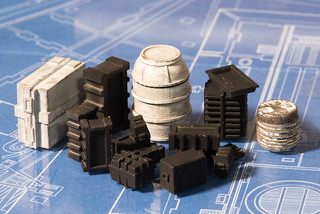 Pack 5 (17-20)(May) 04.23 Received the 4 issues, also received the Shapeways hold bits and the wall panel from ESB that goes on the side of the bunk. I need to figure out what I’m going to do about the corridor floors, I would like to get the Shapeways parts since they allow some lighting under the floor just like the Falcon interior from ESB & ANH, it’s just rather expense and you may not really see it well anyway. I haven’t got any lights/fiberoptic put in at all yet.
8.23 Added the metal framework for the last 3 issues onto what is already assembled. Getting close to having half of the bottom hull complete. Still lots not done as far as the hold and the hallways. Haven’t gotten the framework from issue 20 attached yet, waiting to have time and open pack 6. Got the Paragrafix stuff for the hold and hallways so I need to get going with that. I opened the last three issues here, but haven’t done anything will the hallway parts as of yet. Except for the three cushion rings from last pack. 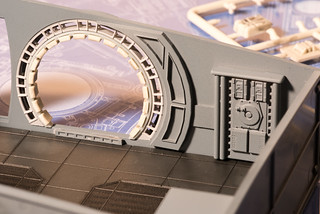 Pack 4 (13-16)(Apr) Got parts for Cargo Hold area, no – planning on painting the walls of the Hold XF-82 (Ocean Gray 2) via BradM73 on YouTube.on 3.28 I took photos and then put together the hull structure from 13-15 and then completed the cushions for the starboard side of the cargo bay. On 3.28 I received the paints I was waiting for. On 4.02 I primed the walls and then I also primed the first group of shapeways items. 04.07 Got the second batch of Shapeways parts and primed them.04.09 Finally got all the walls painted and attached all the extra bits from Shapeways. Finished painting them on 04.26 as shown below, still need to clean up a bit and weather some more. 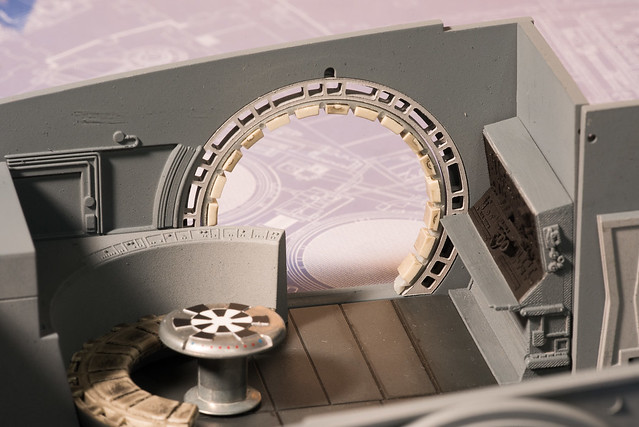 8.21 Finally finished all three of the cushion rings for the first of the hallways, still haven’t gotten the hallways painted or the cushions on the walls.

Pack 3 (9-12)(Mar) Assembled the hull structure parts beginning of the bottom hull.
Got the Cargo Bay parts all primed and then didn’t get them painted again for quite some time. 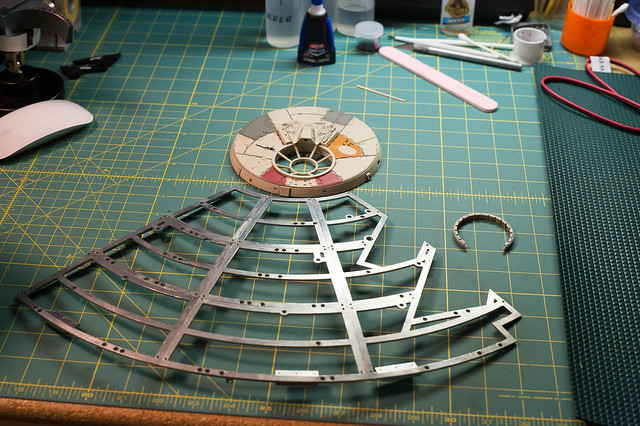 I had also bought a 1 x MILLENNIUM DEAGO COCKPIT CONSOLE PANEL NO YOKE in Frosted Ultra Detail bug it came broken, got a replacement, and it was broken also. Gave up.

Pack 2 (5-8)(Feb) 3.06 Began assembling the couch and bunk. Got the floor weathered, first tried the Oil Paint method and then just went with a Dark Wash, letting it dry mostly and then wiping off part of it. I painted the controls on the backside of the bunk, but then painted over them again with primer. 8.24 I finally assembled the back cushions on the couch
3.09 Assembled the hull structure parts for the start of the bottom hull. 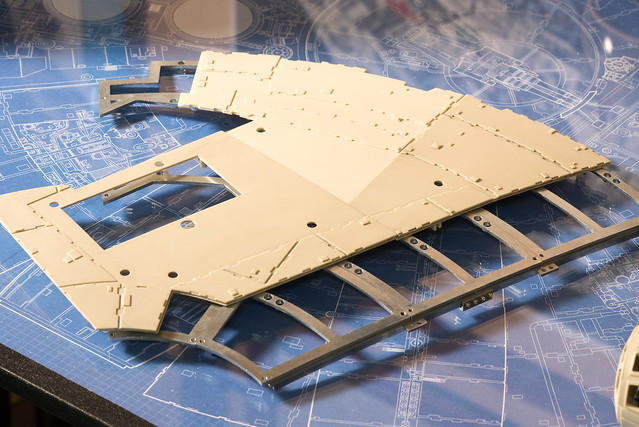 Pack 1 (1-4)(Jan) Don’t have much in the way of paints or other things so I just build the exit ramp part of the top structure and stuck the back cockpit sticker on. I also placed the sticker on the Jackark table. Lastly, I removed the frame on the laser cannon turret and glued it in the correct position. 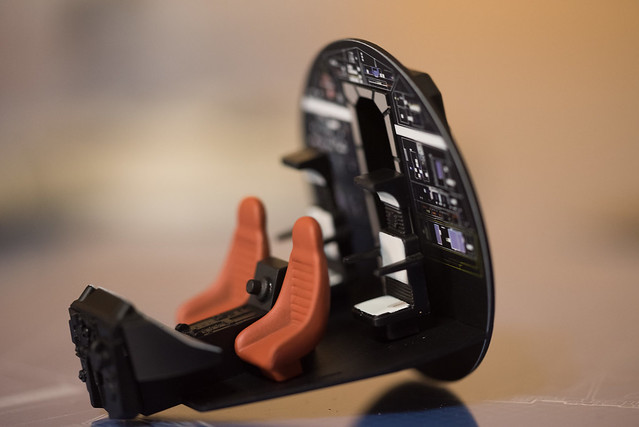 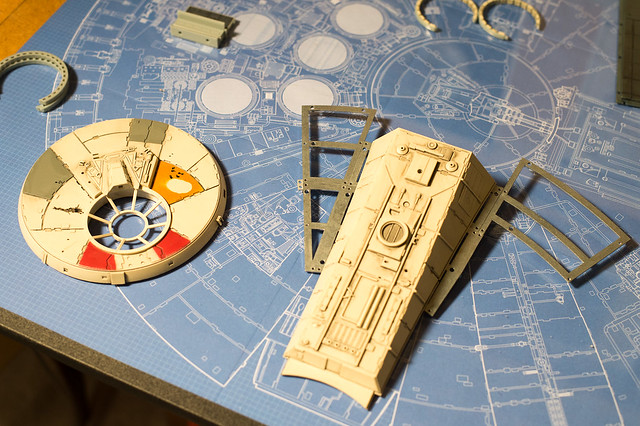 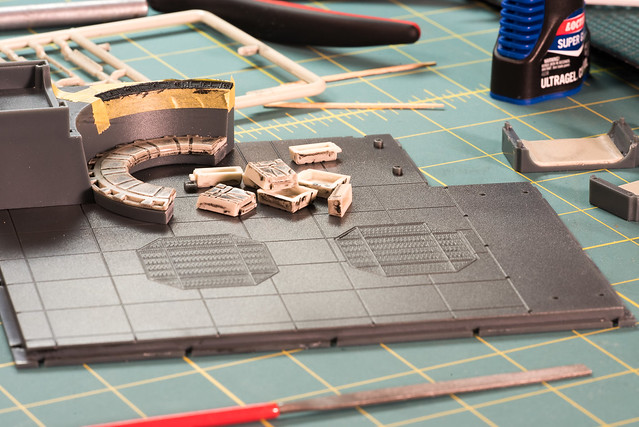 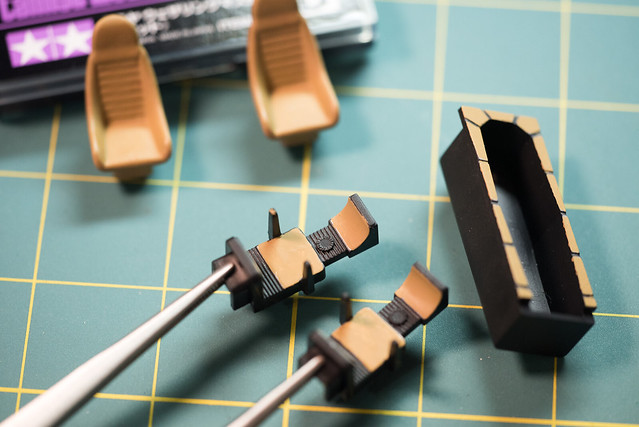 3.06 Assembled cockpit parts but still they are not glued down yet. A photo shows were I’m at early in the month. 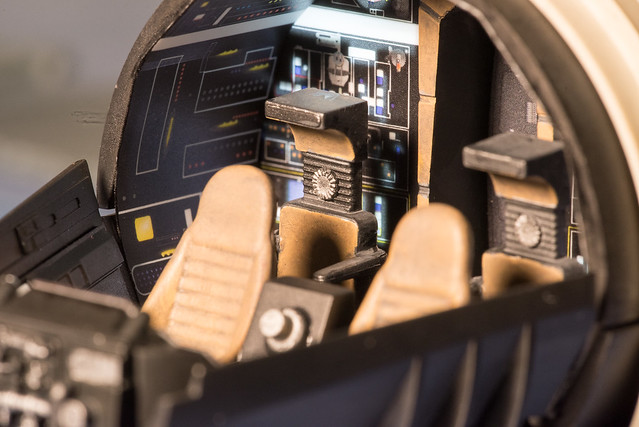 4.09 I painted the interior of the cockpit cone german grey, it’s almost a black.