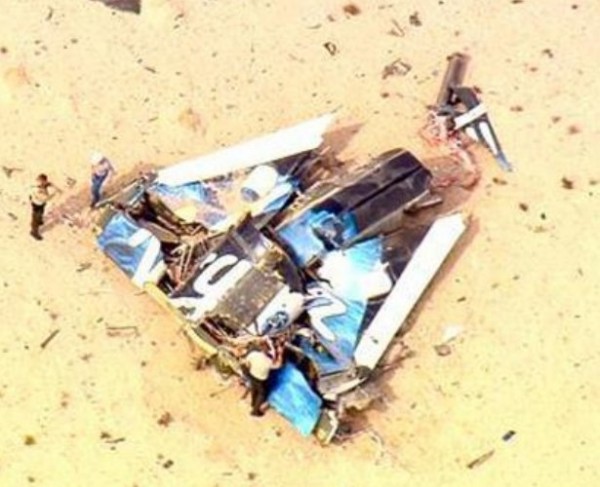 Virgin Galactic’s SpaceShipTwo disintegrated shortly after the vehicle’s tail stabilizers prematurely deployed, according to the National Transportation Safety Board. Friday’s crash killed co-pilot Michael Asbury and injured pilot Peter Siebold. The exact cause of the accident is still unknown, and acting NTSB Chair Christopher A. Hart cautioned against drawing conclusions from the initial findings.
Virgin Galactic

This promotional video from Virgin Galactic shows the third powered flight of SpaceShipTwo, which took place Jan. 10, 2014. The vehicle’s feathering system can be seen in action at 1:46.

rainy but warm; brother has lady hit him from behind; photosmith, delayed again; silly financial; not feeling well – losing weight; out with kimo

Rainy and warm, only 59 when I woke up, started the day with shorts and a hoodie.

Brian called in the morning to tell me he had a small fender bender, but no fenders were bent. The lady who hit him in the rear just barely tapped him and neither saw any damage so they exchanged info and went along their way after the police got there.

PhotoSmith, a cool iPad program for importing photos and doing a bit before syncing with Lightroom, is delayed again. Looks like it’s going to be about a month behind schedule at a minimum. With a small Agile team they should be able to have added a few things and then released instead of holding so long, well at least in theory they should have been. I’m just a bit excited to get my hands on something that seems to be exactly what I was looking for to begin with when I purchased it about a year ago. I’m thankful they are giving v1 users a free upgrade, I know I would buy it anyway so I guess I shouldn’t be so impatient.

Due to my contact lens purchase I’ve messed up my finances for the beginning of the month, now I’ve taken out over $200 out of savings and need another $50 to $100 today to fill up the tank and then allow myself to have some fun on Wednesday @ Parma Trivia. Just about the same amount of money I spent on my contacts. I wish I had at least tried to use the Flex Spending Debit Card before using my Bank Debit. 🙁

I only weighed 212 this morning, not sure if I really am loosing weight or if I just didn’t eat well yesterday. I’ve also been a bit below the weather, a bit of back and forth from the bathroom today, and tummy not feeling well. I’ve only ate a McD’s breakfast boritto, two pears and some Tostitos corn chips.

Texted KimO about meeting up for some dinner tonight over at the Los Arcos, dinner a bit later than I would do but cool enough. Got the car washed and then had a beer over at the Shroom before, went home messed with the car some more and then went over to meet her. She was already there, and we sat down. I felt like I hold the conversation, not very give & take imo. They didn’t have Riesling, damn, the second place to be out of it, and then they didn’t have white zif either. I had suggested that we head over to the Shroom for another drink, she said something about messing up her routine or something on that order if she stayed up late, instead we said goodbye, with a hug outside near her car, maybe I should have tried a bit of something more, nothing too much but Damn It! I want a bit more from the relationship than friends, maybe some benefits but I really do want a true relationship. I’m really not sure if she is open to more or not, mostly I believe NOT.

Rescue personnel look over the wreckage of a helicopter that crashed Saturday morning near Lead Mine on Monday. The helicopter was part of a crew working on wire installations for Allegheny Energy’s Trans-Allegheny Interstate Line. One crew member was killed in the crash.
By The Associated Press
The Associated Press
Advertiser
LEAD MINE, W.Va. — Federal investigators are at the scene of a helicopter crash that killed a member of a crew installing wire for Allegheny Energy’s Trans-Allegheny Interstate Line in Tucker County.

The name of the lineman killed in the crash hasn’t been released.

Colafella says PAR and Winco are subcontractors on the TrAIL project. The 500-kilovolt line stretches from Pennsylvania through West Virginia to Virginia.

A WingCo helicopter crashed while working on the Trans-Allegheny Interstate Line (TrAIL) Saturday near Leadmine Road in Tucker County, claiming the life of one crew member.

Kansas City, Missouri based Par Construction Company was subcontracted to work on the TrAIL project and WingCo supplied the helicopter. Collafella said there were four people on board when it crashed and one of the crew was killed. The remaining three were transported by helicopter to Ruby Memorial Hospital in Morgantown.

The helicopter went down in area Collafella described as “very remote.” However, the site could be seen from Route 219 about three miles from the Preston County line.

West Virginia State Police Sgt. J.L. Clay said the Parsons Detachment of the state police secured the scene and the National Transportation Safety Board and the Federal Aviation Administration responded around 5 p.m. on Saturday.

According to Collafella, the cause of the accident is still under investigation and the NTSB, FAA and contractors will be at the scene today. Collafella said the names of the victims are not yet being released.

LEAD MINE, W.Va. — A Portage man has survived a helicopter crash near Lead Mine, W.Va., that killed an electric lineman, an Allegheny Energy spokesman said Monday.

Federal authorities continued their investigation of the crash that occurred Saturday morning after a crew had finished installing wire for Allegheny’s Trans-Allegheny Interstate Line, Doug Colafella said. The pilot and two other linemen were taken to a Morgantown hospital and have since been released.

Killed in the accident was Gary L. Bland, 52, from Georgia, Colafella said.

Colafella was uncertain which man was the pilot.

The cause of the crash was being investigated by the National Transportation Safety Board and the Federal Aviation Administration, Colafella said. The helicopter went down in the power line’s right of way after the linemen had finished attaching wires to a transmission tower.

“We’re terribly saddened by this accident,” Colafella said. “I can’t emphasize enough what a priority safety is on this project.”

PAR and Winco are subcontractors on the TrAIL project, Colafella said. The 500-kilovolt line will stretch between Pennsylvania and northern Virginia and pass through Monongalia, Preston, Tucker, Grant, Hardy and Hampshire counties in West Virginia.

The West Virginia State Police have released the names of three of the four people aboard a Wingco helicopter that crashed in Tucker County on Saturday. The crew was working on the Trans-Allegheny Interstate Line (TrAIL) off of Leadmine Road near Thomas.

In a prepared statement, state police said, “The helicopter was being used to pick up the subjects from the top of a large metal power line tower. The helicopter apparently maneuvered underneath the suspended wires and may have struck the wires causing the crash.”

According to the statement, Ryan Joseph Lang, 31, of Portage, Indiana, Jeffery M. McKay, 34, of Olive Hill, Kentucky, and Robert A. Rogers, 40, of Dacula, Georgia, were all aboard the helicopter when it went down. The three injured occupants were flown to Ruby Memorial Hospital in Morgantown for treatment.

“A fourth passenger on the helicopter was pronounced dead at the scene from injuries received in the crash,” the statement reads. “The identity of the 51-year-old male has been withheld pending notification of next of kin.”

buddy of mine in a helicopter crash, he’s OK thankfully.